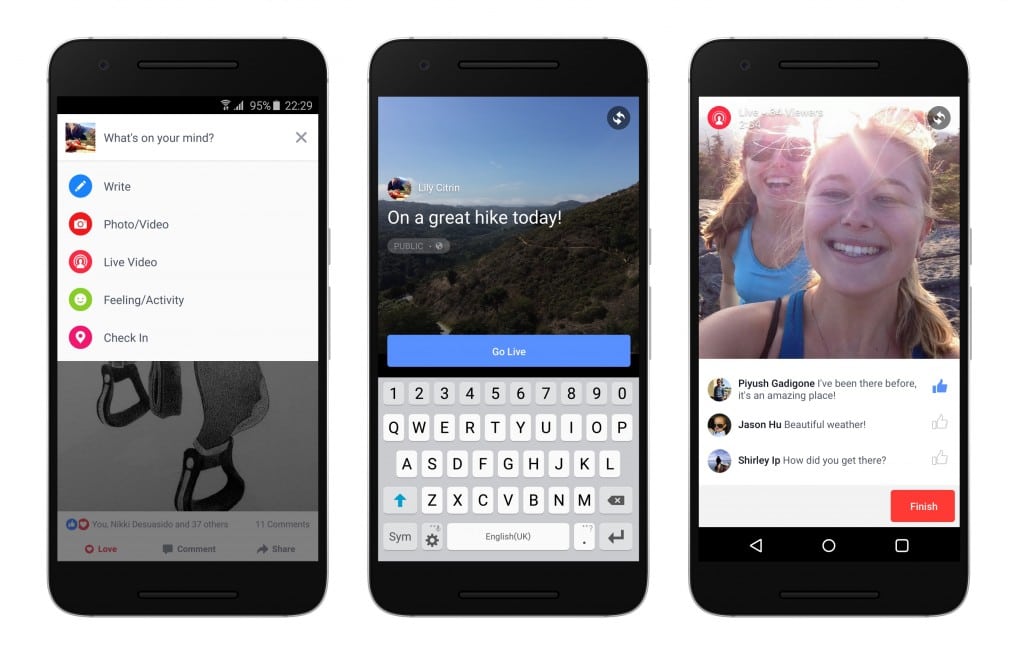 Cut to the chase, Facebook Live is a new social media platform under Facebook which enables users to record videos and broadcast with not only their friends but with their followers and the world.

So from now onwards, if you are out on an adventure or even if you are on an evening walk and witness something wanderlust happening, something which people should be aware of or things to get you off your chest. You simply can tap on your iOS or Android screen to stream them.

Facebook live was made live in August 2015 as a competitor against the live streaming app of Twitter, Periscope. Initially, only special personalities were gained its access and later stretched to the journalists. Only from April 2016, it granted its access to billion active users.

Marketing through Facebook has become easier with the use of right strategy and influencing marketing. There is much for new brands to engage in to enhance their brand image through it.

Facebook live and facebook video are two such new products which when utilized by marketers on a huge platform can move mountains.

You are good to go with using Facebook Live if you are a iOS or an Android device user. However, the platform cannot be enjoyed on the web, though you can watch videos on Facebook.com.

To be able to use the new feature of facebook, Facebook Live, make sure you have the latest updated version of the app. If not so, you can update from Google Play Store or app store.

How to find the Facebook live option within the app?

Right in front of your eyes when you open the app, you’ll find “What’s on your mind?” dialogue box. When you tap on it, you’ll find a new option added to the old ones, labelled as ‘Live Video’.

How can it help build brands?

Instead of promoting your add with the help of celebrities featuring your products, which is not quite as effective these days, this type of marketing involves sharing individual’s experience on the product or brand.

Facebook live enables you to know your audience as and while streaming online. As you witness the map, hover the cursor over and blue dots and you can know what your audience is made of.

Video campaigns are conducted by enterprises to gain audiences by listing a questionnaire or creating a story on the topic and then rewarding the best contributions. This UGC campaign combined with Facebook Live can be a more integrated way to connect to the users.

This was all about Facebook Live and its positive effect on marketers.

Facebook Live for Marketing
Saturday, June 4, 2016
★★★★★
5 5 1
“Excellent ability & customer service. I could not have been more satisfied with their performance & will use them again.”
- Marc Rovner

Facebook Live for Marketing
Thursday, September 22, 2016
★★★★★
5 5 1
“Working with Simplio Web Studio was a fantastic experience. The service provided was amazing and professional. It was a delight to work with Nir, who went the extra mile to meet our demands in a timely manner. He really made our vision a reality by creating us a classic site, but moreover the relationship we formed is something our company really appreciates. It was a pleasure working with Nir and the team at Simplio Web Studio. We highly recommend them to all and we look forward to working and doing more business with them in the future.”
- Joe Baj & Chris Callender

Facebook Live for Marketing
Thursday, September 22, 2016
★★★★★
5 5 1
“From beginning to end, the team at Simplio provided top of the line customer service. The web developers are incredible and made sure we got exactly what we were looking for! They truly went above and beyond to make us happy and we couldn’t have been more pleased with their talents. We would highly recommend them. Thanks so much Nir!”
- Travis Caudell

Facebook Live for Marketing
Thursday, September 22, 2016
★★★★★
5 5 1
“After over two years of research we chose Simplio. We are so far very satisfied. These people answered the phone on a Sunday and fixed a problem that was not even their fault. It was the host company which I had chosen that had caused our site to go down.”
- Armando Rodriguez

Facebook Live for Marketing
Thursday, September 22, 2016
★★★★★
5 5 1
“Outstanding in both knowledge and professionalism. Nir and the staff at Simplio are Excellent in branding, web design and overall web presence. Definitely recommended!”
- Peter Prudenzano

Facebook Live for Marketing
Thursday, September 22, 2016
★★★★★
5 5 1
“They are now part of the Diastasis Rehab business team after working with them almost a year now. I cannot even imagine having another company managing my Presta shopping cart. After a bad experience with a programmer, I needed a new programmer (one that knew prestashop shopping cart) and most important one that I could trust. Finding all three was a difficult process! Lucky for me I found them. I cannot say enough about the diversity of services that this company provides. Every step of the way they make amazing suggestions to increase my sales and they get back to be right away either by email or phone. They have even created a simple and easy check out program for Presta Shop. They are actually a one stop shop! They updated my SSL, are setting up and changing my server to a dedicated one, setting up streaming of my DVD, website design, creating a specific program for address verification on Presta cart and handled the integration of Presta cart with my fulfillment house. I am now working on developing an APP with them”
- Julie Tupler

Facebook Live for Marketing
Thursday, September 22, 2016
★★★★★
5 5 1
“Simplio really helped me out of a jam. They did exactly what I needed on a very tight time frame (with little notice too!!!!) They are my new go-to guys for any Prestashop needs! Thanks Simplio!”
- Gina Bultman

Facebook Live for Marketing
Thursday, September 22, 2016
★★★★★
5 5 1
“Excellent service! Nir was exceptionally helpful in solving a lot of issues with our website and making the user experience more smooth. He understood the needs of our school and helped improve the website tremendously.”
- Chaya Tamir

Facebook Live for Marketing
Wednesday, January 4, 2017
★★★★★
5 5 1
“What impressed me most about working with Simplio was their attention to detail and excellent communication. Not only are they talented developers, but, they are also pleasant to work with and highly professional. Highly recommended!”
- Nathan Manning

Facebook Live for Marketing
Thursday, October 19, 2017
★★★★★
5 5 1
“What a profissional service Simplio offers.I hired them to rebuild my website for my business and they were creative and professional. Nir was on top of the whole project from day one, until he delivered the project on time. I will defiantly recommend Simplio to anyone who is looking for website services. From creating, designing to maintaining your image online. Good Job Nir and the rest of your group.”
- Tarek D.

Facebook Live for Marketing
Thursday, March 29, 2018
★★★★★
5 5 1
“Simplio was fantastic to work with. They were fast, communicative and incredibly helpful to me. I highly recommend them to anyone who needs help with their digital needs!”
- KATHLEEN Manning

Facebook Live for Marketing
Monday, January 28, 2019
★★★★★
5 5 1
“All details and requests were met in prompt an friendly manner. Would recommend on any day to anyone who wants to feel their business is in great hands.”
- Regina Z.